WHY HE TURNED ON THE SUN: A Throwback Tale About the Beginnings of Solaric Corp. 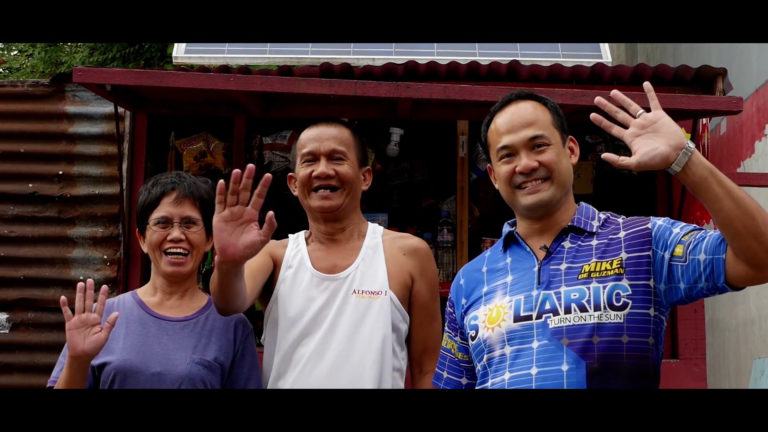 It all started with a little experiment

“We ran a little experiment on how to run an air conditioner without using Meralco power,” says Mike De Guzman, President of Solaric Corp., when asked how the Philippine solar power equipment company began.

He was the chemistry lab geek

“My formal education was in business — but I am a power engineer at heart. Even before I finished high school, I assembled a homemade generator during the 90s power crisis. I always loved tinkering around with all sorts of electrical projects growing up. At age 10, my brother and I rewired the lighting in our bedroom to a bedside switchbox. We made our own electric cars out of junk spare parts and toilet paper tube holder battery packs.”

Mike was the chemistry lab geek in high school, who was known to accidentally blow up the science project by creatively mixing substances in quantities that would definitely result in an epic blast. He went on to business school in California for college, while his parents were imagining their son becoming an investment banker of some sort. During his final year in business school, a fire erupted and gutted their house. Mike then had to learn about construction and construction management, as they rebuilt their residence in Northern Cali.

But challenges define a person’s character

It’s true — challenges build character and necessity is the mother of invention. As the rolling blackouts of the 90s ensued, Mike learned to assemble a generator from a dynamo he purchased in Chinatown, with a Yanmar diesel rice thresher motor that had truck fan belts linking it together. As he began to understand the art of building homes, he embarked on a career in real estate development. This proved to be far more profitable than working for corporate America as a fresh college grad. Thus, in his early 20s, Mike built houses and supervised large work crews of American contractors.

Once a hobby, always a hobby

And then they became two

“I met my wife Jade in an open water diving trip. We had a mad plan after getting married to go back to the Philippines and set up a BPO or call center, and run it until we grew old,” Mike grins, as he recalls events that transpired more than 15 years ago. “What I liked most about setting up the call center was constructing the facility, configuring backup power systems, and stuff like that. The BPO business exposed us to all sorts of business ideas and business models, one of which was telemarketing for solar systems in California. That was what planted the seed of inception.”

Mike started analyzing energy costs in running their call center. He discovered that energy costs often exceeded rent, and was almost approximately the same amount as their salary and wages expense. As he indulged in further research in power, he realized that the entire nation was actually paying way too much for power. That triggered his interest in power conservation in the Philippines through solar power equipment.

“Then, during one of our vacations to the United States, we rented a fabulous house with rooftop solar, owned by a plastic surgeon. Piqued by the solar phenomenon, I rummaged through the house looking for its batteries. All I found was a red box called SMA that displayed kWh exported to the grid without battery. After a little research, I found out that the house was actually sending surplus power back to the grid through some sort of credit program with the utility. The government was virtually paying the surgeon for the excess power, with tax write-offs and subsidies. Right then and there, I was sold. I knew I had to be at the helm of the solar revolution in the Philippines.”

As soon as they touched back down on Philippine soil, Mike and Jade incorporated Solaric. The rest was history.

For more information, please visit www.solaric.com.ph or email us at info@solaric.com.ph call 5040092 or 09178603141. We will gladly explain to you how the system works, or schedule a survey, so we can give you options for your new home or existing homes or businesses. At Solaric, we Turn on the Sun.