MANONG AND THE GIFT OF POWER 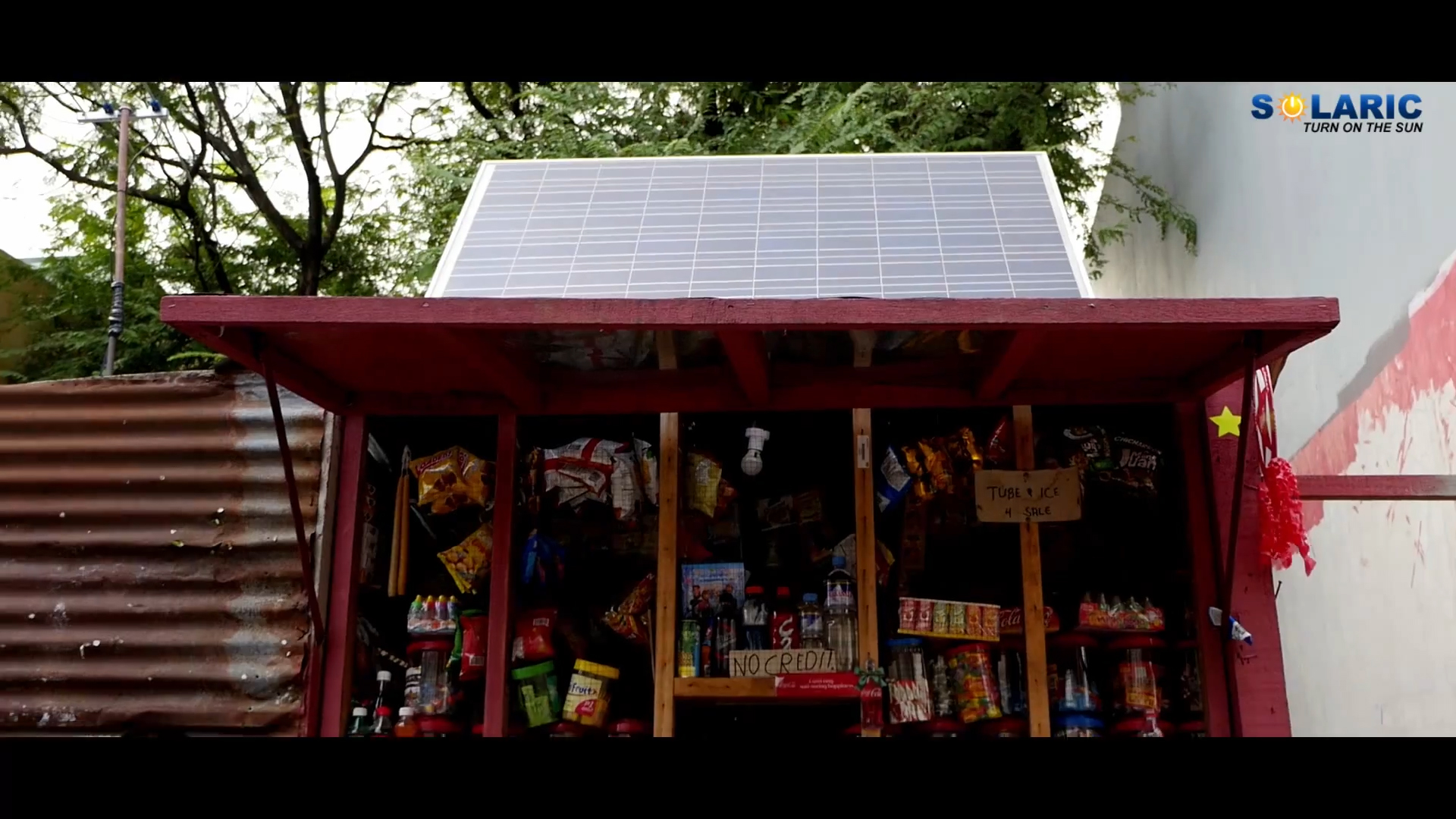 Solaric has been busy for the last 5 years installing rooftop solar systems all over the Philippines – from large industrial steel plants, to cold storage facilities, to factories and warehouses and buildings, to thousands of homes and businesses in Asia. The very simple story of Manong Rodel was one of the more memorable installations.

Situated across the street from the Solaric stock house on J.P. Rizal in Makati City is a small sari-sari store, owned by Manong Rodel. Three years ago, the store had no electric power and no connection to the utility provider, because he could not get a certificate of electrical inspection. Manong Rodel’s work-around to the problem was to use a kerosene lamp for light and a car battery for power. When the car battery needed to be charged, Manong would walk four blocks away just to charge the battery at Php60 per charge. The power would last them for five days of power. Manong Rodel and his wife had been living there since 2006. They were a nice, honest, and hardworking couple. “Ang tagal na namin dito,” said Manong Rodel’s wife, “kahit minsan, hindi kami nagka-ilaw dito. Talagang gasera lang.” 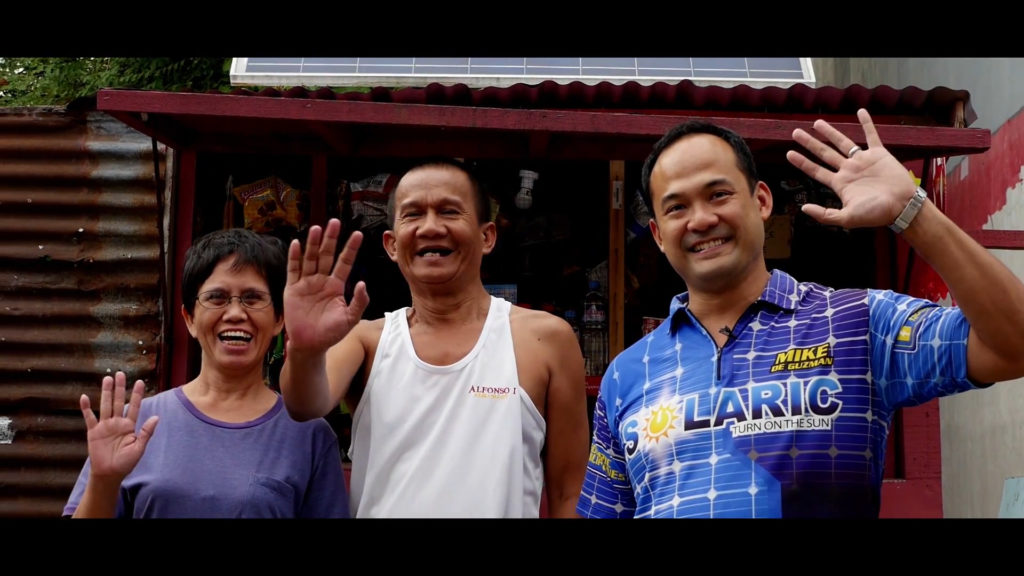 What the Solaric Founders did

“I go 1,200 kilometers to go to Tacloban to power schools. Yet right in front of me was a hardworking, nice, and honest couple and yet, they had no power,” said Solaric President Mike De Guzman. “And that’s our expertise: to bring power anywhere.”

Solaric turned on the sun for Manong

So the Solaric team went to work and installed a solar panel on the roof of Manong Rodel’s sari sari store. Finally, after eight years in the darkness, Manong now had power for his lights, electric fans, radio, and other appliances.

And then there was a typhoon

Typhoon Glenda (otherwise known as Typhoon Rammasun) was one of the only two Category 5 super typhoons recorded in the South China Sea, and was the first typhoon to directly impact the Philippines in 2014. Typhoon Glenda came and knocked out power in the entire city of Makati in July 2014. For a few days, there was a city black out and no one had electric power. Except one small sari-sari store owned by Manong Rodel.

We would like to share a short solar story on giving and receiving.It has been a very busy 3 years putting Solaric in many places across the Philippines. From Large industrial steel plants, cold storage facilities, hundreds of homes and businesses. One of our more memorable installations is still Manong's Sari Sari store. It was an installation we did because we felt we had to something.On times of need, manong always offered me parking, a rare luxury in Makati but have not asked anything in return. One day I noticed Manong carrying a heavy 20kg battery so he can run his light bulb, he carries it over 400 meters to get it charged for 40 pesos and it runs his lights for about 4 days before conking out. You see Manong house is not a formal house, he has no meter and honorable enough not to do the "jumper". His only option for power is kerosene lamp or 12v battery with bulb that needs constant carrying and charging. As a Solar systems integrator, this was an easy energy problem to fix and subconsciously irritated us as it was a solvable energy problem on front of our store. We took care of that by putting in a spare solar panel we had around and a simple offgrid setup. We valued Manong's generosity by giving us parking and rewarded him with the gift of power. Merry Christmas to our customers and our FB fans. We look forward in serving 2017 and beyond.From Mike and the Solaric Family.www.solaric.com.ph 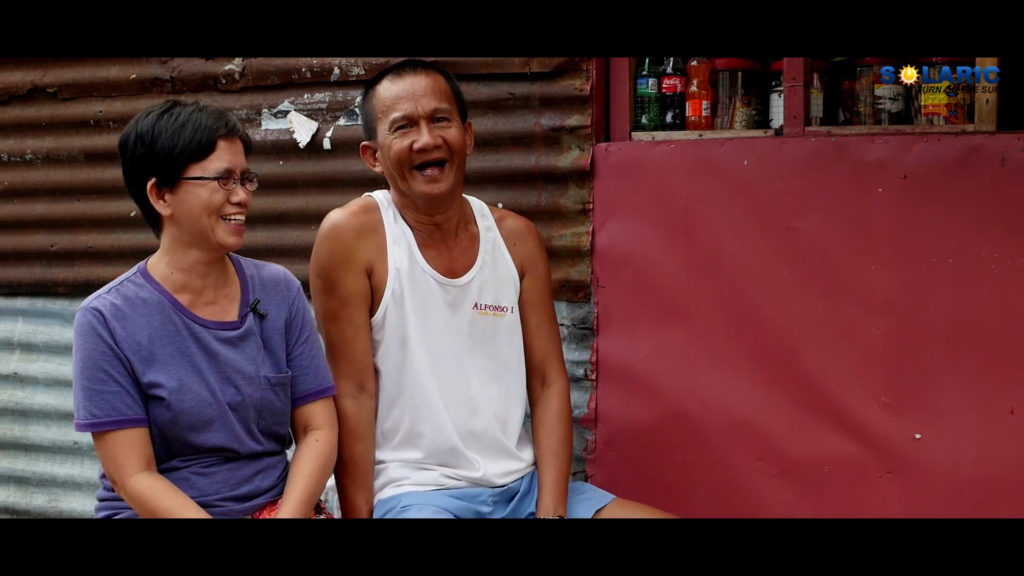 The gift of power

As a systems integrator and as the leader in rooftop solar, Solaric is always on the look out for energy problems to fix, because the way they view it, all energy problems can be solved. So when the Solaric Founders noticed that problem, they installed a solar panel and a simple offgrid setup.  Solaric gave Manong Rodel the gift of power.